Social Media & Cars: Mirror, Mirror on the Wall, Who is the Most Social of Them All? 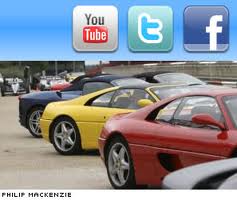 Despite all the opportunities it brings, car industry has been quite slow to catch up the Social Media wave. There has been great improvement with the company websites, yet Social Media has been seen as a strange thing everyone wants to do yet no one knows how it works. Something that is complicated to measure and justify for the top level managers, who do not “believe” in Social Media. It has been seen as a trend for the “youth” and since exact leads cannot be measured, it seems like it does not bring any benefits to the business. After the rise and fall of Second Life (almost all car manufacturers got involved), it has taken a while to convince decision makers of Social Media’s importance.

Now the attitude is changing – even car industry has realized that Social Media is here to stay and if they do not get involved, they will lose potential customers. There are plenty of enthusiastic customers online, who love talking about their cars and are easily found (try Google search, you will see). When brands realized it, they saw a great opportunity to engage with customers. Also, Social Media is not “only for teens”, especially considering that the biggest growing user group in Facebook is people in their mid thirties.

Many car manufacturers had already (and still have) media-rich and interactive websites to engage with the audience and show the features of new models, yet Ford has been one of the pioneers to explore the unknown terrain with the Fiesta Movement and Spanish Maskedummies.com for young target. Only Ford Argentina jumped into Second Life wagon, and maybe that is one of the reasons senior executives had more courage to act. Ford’s Social Media director Scott Monty has been active on Twitter and his own blog, and has got the rest of the company, even executives, involved.

Seeing Ford succeed, many other companies urged to have an online presence on Facebook, Twitter, YouTube and other Social Media. They offer new functions such as competitions, guided tours, multimedia items or in Toyota’s case, interactive games. GM has established an active presence on Twitter, and a few blogs for car owners to talk about products, issues and latest news. Nissan created buzz around the launch of its luxury brand Infiniti in Social Media. VW’s created ‘People’s Reviewer’ competition around its campaign for the new Tiguan.  The company invited people to apply to review the car via YouTube and Twitter account linked to the campaign. Audi hosted a live video of the new A7 launch event on their Facebook page 26th of July. Mazda USA is preparing the 2011 launch of Mazda2 in Facebook, Youtube, Twitter and Flickr.

So who is the most social of them all?

Is Ford really the king of Social Media? Checking out for example the Facebook numbers, results are quite surprising:

The competitors are surely catching up and it seems like leading Facebookers are BMW and Audi. How did they succeed to have 10 times more Likes than the rest of the car manufacturers? First of all, they let their customers and fans tell how much they love their brand. Secondly they let them show how much they love their car by letting them post their own photos and videos to the page. Thirdly, they let them tell about it with their own language. What the brands should remember is that being social only USA based and in English does not attract all the users. Establishing a fan base and having a discussion with country’s own language is essential, giving as an example Audi Finland with 57,226 Likes. Considering that in Finland there are only 5 million habitants and the global Nissan Facebook page has only 1,000 more Likes, this shows a great localization result.

This tactic also resolved one of the biggest problems in Social Media: content creation. Instead of thinking hard what to write or tell (and losing interest in this process), they let their fans fill up the page, keeping it alive.

But having fans is not the only benefit of the Social Media and localization for the car industry; it is a great customer service tool, since companies have the opportunity to monitor all social media networks for mention of their company. This gives them the possibility to take advantage of the good publicity or to take action to solve an issue with an unsatisfied customer telling everyone what is wrong with his car. If you handle Social Media only from regional level and do not have local market units involved, you will lose a great benefit and many potential customers (besides of existing ones).

Whether the car manufacturer’s story turns out to be a fairytale or a ghost story, depends fully on cooperation and open communication between the global, regional and market unit teams. To make things work, it is essential to remember that the most important factor is the customer. Would you send a 100% English speaking commercial to sell cars in France or would you prefer someone who can talk to the customer in their own language?