Brand Domains: Passing Trend or The End of .com? 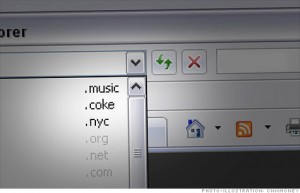 What is a brand domain?

Brand, or generic, domain means website urls ending .brand, .thing or .idea instead of .com. The idea is to allow businesses that joined Internet later to find alternatives to “dot com”, but in practice these domains would most likely sit alongside established domains such as .com and .org. The possibilities vary from hobbies, demographics, and professions to corporate brand names. Few examples are .lol, .bank, .baby, .music, .doctor, .loreal, .youtube, .google, .coke, .apple and .twitter.

ICANN announced that the companies that have applied for the brand domain names are now going through an independent review process with a 60-day comment period and a 7-month objection period. The organization will review each proposal, make a criminal background check for each applicant, and assure that company’s financial plan is stable and contingencies exist in case a company goes out of business. If there is a conflict between names, ICANN encourages competing bidders to reach an agreement together, but the organization will hold an auction if the parties fail to reach a compromise.

Expensive – but a trend to watch closely.

These domains do not come cheap.  There is a $185,000 fee per application, and so far ICANN has collected about $350 million from the bidders. ICANN states that the main reason for the high cost is the technical complexity as it is not simple to run these top-level domains. The first domains are estimated to go live in the first quarter of 2013.

It is expensive, but most of the brands are registering the domains for defensive reasons to avoid competitors and other public to acquire their brand domains. The application cost now might be $185,000, but if a competitor or counterfeiter registers the domain first, the acquisition cost in the future may become extremely expensive.

End of dot com or a passing trend?

Besides of applying for brand names, some companies such as L’Oréal are also registering generic domains such as .skin, .hair and .makeup. This is expensive, but it may be a very smart move against the competitors if the trend takes off and the brand will receive more traffic and consumer interest. It will be interesting to see what Google’s point of view is regarding the subject, and how this will affect the SEO as the keywords in domain name have a positive impact on ranking. Maybe Google itself will start giving or selling .google domains for businesses and users to increase its prominence in the cyber space?

At the same time, people are used to .com and country specific domains such as .co.uk, .es and .it. When the system is launched, how do you explain people that “doctor” is a website without www or .com? It is also to be seen how the system and new domain endings work in practice. For example, if the user types “doctor” in the browser bar, he is expecting location based search results. Instead, he might end up in the page of whoever owns the domain .doctor, which will most likely only annoy him. This is why the url structure change may result confusing for general public and the adoption rate may be low. If the consumer interest and adoption rate are low, after the first excitement brands may start simply redirecting these brand domains to their  .com site.

It is an expensive game to play and at the moment only the big players can invest in these domains. However, if the technical cost goes down after the first wave of brand domains, it might be the end of the “dot com”. Or then we only end up with a big bunch of 301 redirects.