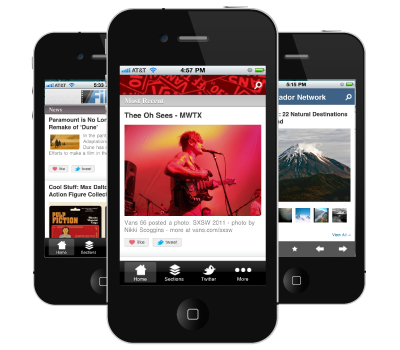 Ever dreamed of an app that works in all devices and operating systems? Creating a mobile app requires investment and resources, but with increasing number of players in the mobile space, app development has become even more complicated and expensive. Instead of one iPhone app, you need to decide whether you will also develop the same app for other operating systems, such as fragmented Android and emerging Windows OS.

But there is hope. HTML5.

According to Michael Mullany, VP of marketing and products at Sencha, already 95% of the functionality of native apps is being delivered by HTML5, and the new technology will emerge competitive on just about every level within two years. Meanwhile, research firm Strategy Analytics forecasts 1 billion HTML5 compatible phones to be shipped in 2013 (up from 336 million in 2011), which has provoked interest among big players such as Facebook and Google.

In addition, Financial Times surprised the market last year by withdrawing FT iPhone app completely from App store, and creating its own HTML5 app instead. Within only few months FT managed to migrate 1 million of its mobile users from its native mobile app to the browser-based version. Currently 20% of total page views and 15% of new B2C subscriptions are coming directly from mobile and tablet devices. Quite impressive.

What is an HTML5 app?

HTML5, also called “the flash killer”, means a fifth generation of coding language that is used to create web pages. It gets to bypass phone’s hidden components that in the past have forced developers to create a specific app for each OS. This means that instead of creating various versions of the apps for different OS and devices (iPhone OS, Android, Windows…), by using HTML5 companies are able to develop one mobile / tablet app that is suitable for any device or operating system.

Main benefits: cost savings and accessibility. Besides huge savings on mobile / tablet app development costs, you are not restricted by terms and conditions and do not require anyone’s permission to distribute an HTML5 app. It means that there is no 30% cut of app revenue, which happens with apps sold via native platforms. HTML5 apps are also searchable by search engines such as Google, which expands their reach beyond native app stores such as Apple’s App store and Google’s Android market.

Main web and mobile browsers support HTML5 and most of its features are able to run on low-powered devices such as smartphones and tablets. However, even if HTML5 has been improving fast there are still some limitations such as speed, access to certain phone features such as Bluetooth, and inability to handle the intensity of graphics performance for maps and fast-moving games as well as native app. What also is required for HTML5 to really kick off is an effective distribution channel for the HTML5 apps, user feedback system, and simple and secure payment channel. In general, quality of the apps may also not be up to same standard if there is no central quality control.

Should our business invest in native or HTML5 apps?

If the aim is to develop a graphic fast-moving game or location-based app using maps – maybe not. If the aim is to develop an engaging mobile app that does not require necessarily fast internet connection, HTML5 apps can make life less complicated. Instead of a long process of creating, testing and approving many versions of the native app for different operation systems, company can concentrate on one mobile app that is suitable for most of the devices. This allows us to invest more time and resources in something more important, such as building a proper mobile strategy, instead of running around like headless chickens focusing on small details instead of the big picture.

To be honest. If we have a possibility to produce something that most of the people can access while making considerable time and cost savings – shouldn’t we?