Social Media: How to Find Real Influencers & Get Them Talking About YOU 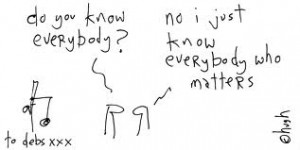 Influencers…one of the hot words of the 2010. Long way short, the culture has changed and people search real recommendations from real people, not brands. Some real people have more influence than others, brands should identify them and encourage them to tell everyone how great their products are. OK this far.

Where it goes wrong is the way brands are identifying and reaching these influencers. Most of the brands rely only on numbers and reach such as quantity of Twitter followers, Facebook friends or LinkedIn contacts and number of impressions the posts get. But what is real influence and who has it? To be honest, real influence is not about number of tweets or followers, it is all about context and expertise.

Scientists at Northwestern University, Illinois, ranked the most influential people “tweeting” based on how individuals shaped trending topics. According to the study, Twitter’s most popular influencers (mostly celebrities e.g Justin Bieber who alone accounts for 3% of Twitter’s servers) are actually not that influential. Surprisingly or not, the real most influential users on Twitter were individuals with lower profiles, but a great expertise in their own fields. People listen real people, but when you think about  it –  is a celebrity one? They are not perceived as a real persons anymore, but more as brands with its own strategy and products.

What comes to the other metrics, some companies sell the idea of “easily identified influencers”. For example Sponsored Tweets declares that brands can buy influence just by paying influential Twitter users to tweet their messages, but its efficiency is quite questionable. To be honest, searching real influence in efficient manner on social media platforms is like running a real-time PPC campaign: monitoring market trends, adjusting campaign in the real time to target the right keywords (influencers) and modification of the message so it is aligned with what people are looking for. Tip: Instead of reach numbers, look closer at retweets and trend setters.

However, real influencers unlike keywords cannot simply be bought. There are two problems with “pay-for-play” strategy:

Many of your customers are dedicated advocates who love your products, your brand and your industry. Other people trust that these advocates’ opinions are authentic, and are influenced by them. The problem here for the brands has been that these normal people do not have the reach of influencers.

But they could, if we forget (and stop wasting money on) the popular, yet irrelevant influencers and instead identify real brand advocates and concentrate helping them be seen and heard by more people. By empowering the customer to act as advocate beyond his personal networks, could turn him into a influencer. In the end, how much would it cost to give him some help with blogging, twitter, facebook, linkedin and other social networks? Surely less than paying more than 10.000£ for a single Britney Spears tweet.

User-generated content (UGC) is the key. These fans are delighted to be asked to share their opinions, since it shows that their favourite brand knows who they are and cares about their opinions. And since they are real persons, the potential and current customers trust their opinion while making their purchase decisions.  By enabling and encouraging this conversation, you are creating a collective influencer network that can drive more sales.

Back to the starting point: how to identify these potential influencers? It is simple – let other customers decide. For example, let site visitors vote on the helpfulness of other customers’ feedback and you will get the ranking. Give public recognition for your top contributors, which will encourage other advocates to react. As an example, Apparel retailer Free People created an email campaign featuring their top reviewers and increased their review volume by 93% that week. They also received more quality reviews after the campaign with more information and details.

Whichever way you prefer, courting or helping, do not forget how important it is to be honest and respectful.  Do not use hard sell, tell these people you would like to hear their opinion and it really counts. Top influencers or potential top-influencers love hearing it, but please do not lie. They might love you or your money, but they are not stupid.