Despite huge media coverage, the iPhone OS is actually not that popular it seems.

According to a recent study by Nielsen measuring the recent acquired Smartphones in the U.S, iPhone OS has experienced a decrease in popularity while Android OS is experiencing a steady growth. 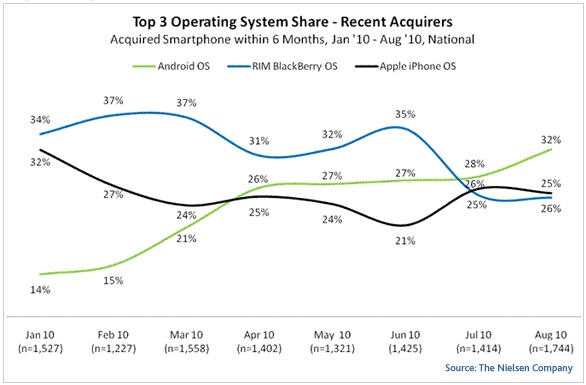 This data combined with the ComScore study in July 2010 claiming that Blackberry owns 39.3% of the Smartphone market share in U.S. compared with 23.8% market share  iPhone has backs this up. Android OS follows the two with 17%, a number that is constantly increasing. Windows Mobile holds 11.8% of the market share, Palm 4.9% and Symbian (Nokia) only 3.2%.

What comes to Europe, it is a completely different story. The recent study by comScore reveals surprisingly that the five largest European Smartphone markets in Europe are still ruled by Nokia. A high 51.2% of Smartphone-owning respondents in the UK, France, Germany, Spain and Italy have a Symbian OS by Nokia.

In UK and France, Symbian (Nokia) is the most popular Smartphone OS with 37.3% and 35.4% of the market share respectively. However, in both countries it is challenged by Apple’s iOS with more than 30% of the market share in France and almost 30% in UK.  In UK the third challenger is Blackberry with 16% and in France Windows Mobile with 13.8%.

In Germany Symbian (Nokia) has 51.6% of the total market share, compared with iPhone OS with 21.2% and Windows Mobile with 16%.

Surprisingly or not, the Symbian (Nokia) rules Italian and Spanish Smartphone market with a high 72.5% and 69.3% respectively. iPhone and Windows Mobile have a long way ahead in these two countries with their percentage remaining very close to 10%. And no, these two markets are not immature markets what comes to the Smartphone adoption.  They actually have the largest percentage of mobile users with a Smartphone in Europe – with 34.1% for Italy and 31.9% for Spain.

Now why is that?

One of the reasons could be that Smartphones such as iPhone are very expensive, or require at least £50 a month contract for two years, while Symbian phones are available at a reasonable cost to anyone who wants a Pay as you Go phone. One example is the Nokia 5230 that has sold more than 10 million handsets and has most of the features user wants from a Smartphone. It is classified in competence at the same level as the mid range Android devices and very close to the 3G and 3GS iPhones.

And why should I care?

Because if you want to get involved in mobile marketing, you need to know which mobiles your target audience is using for the simple reason that the mobile apps need to be developed with a specific operating system in mind.

If you want to reach the most of the market, but at the same time want to create buzz in press, you will not be able to choose between Apple and Android for app development in the U.S. nor between Symbian (Nokia) and Apple in Europe. For the best coverage you need to pick both and stay updated on the latest mobile trends and numbers. Press will love the iPhone app, the consumers the Symbian or Android app.