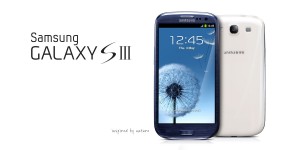 Samsung’s new Galaxy S III is smart … very smart. The mobile manufacturer unveiled last week in London the highly expected addition to its Galaxy S family, after creating a lot of hype around its launch. Even if the launch event itself was not as impressive as Nokia’s Lumia’s, the new Smartphone makes iPhone look a bit “old school”. Maybe the iPhone5 launch is so delayed, because Apple needs to reinvent phone’s features after each Android launch to seem innovative? Who knows…

Besides its big screen size and 720p resolution, Samsung Galaxy III is differentiating itself from the competition with eye tracking capabilities. The technology called Smart Stay allows the front facing camera to monitor your eyes and know when you are looking at it. This allows the mobile not to “sleep” from inactivity if you are watching a film or reading an e-book, for example.

Other interesting smart feature called Direct Call is well adapted for real life. For example, if you are sending a SMS to someone, but decide it is actually simpler to give him a call, you can move the phone next to your ear to make a phone call to that number. With the Beam sharing function, that combines NFC technology with Wi-Fi Direct, you are able to share movies and music with other phones by simply tapping them. You can also throw content to TVs, as well as make the TVs mirror what is on your Smartphone screen.

The mobile device uses ‘S Voice,’ an advanced natural language user interface, to listen and responds to your words. You are able to use it to command the phone with only your voice to snooze, play songs, turn the volume up or down, send text messages and emails, organise your schedules, or take a photo. It is to be seen whether it understands the Scottish accent better than iPhone’s Siri.

Samsung announced that it will launch the 3G version of the Galaxy S III end of this month, and 4G version is arriving later this summer. Surprisingly the manufacturer has decided to launch first in Europe on 29th May, before launching in the North America in June. There has also been rumours that the phone would be launched before the USA also in Asia, Africa, and Latin America. Interesting choice. One of the reasons might be the objective to strengthen Samsung presence in the other continents as it has a strong presence already in the USA.

According to IDC, the global sales for mobile devices (feature and Smartphones) increased 11.1% in 2011 compared with 2010 with Nokia leading with 27%, Samsung with 21.3%, Apple with 6%, and LG with 5.7% of the global mobile market share. The top device manufacturer by market penetration rather than sales is Nokia in Western Europe, Samsung in the US and Sharp in Japan.

What comes to only smartphones, according to IDC, also smartphone sales showed strong growth worldwide in 2011 the global sales growing 31.8% in 2011 compared with 2010, and Smartphones represented 31.8% of all handsets shipped. Samsung leads the way with 19.1% market share, Apple follows closely with 19%, Nokia is third with 15.7%, RIM with 10.9%, and HTC is fourth with 8.9%

It is an interesting phone with interesting features, but it does not seem world changing. It seems more like a refreshed version of their already successful model. However, as the company is planning pop-up stores across Europe to give customers the possibility to play with the Galaxy S III, I am hoping to see a stream of American tech tourists arriving to Europe to get it – just like we used to travel to the USA to get an iPhone.

And yes, I will be happy to go and play with the Galaxy S III as well.