Internet of Things will remain one of the hottest trends in 2016, with analysts predicting a massive growth in consumer sector in the next few years.

However, IoT is not without its controversy. It has been criticized for being slow to kick off due to the lack of perceived value, privacy concerns and the high price. Even worse, according to Acquity Group’s 2014 Internet of Things study, 87% of the consumers hadn’t even heard of the term “The Internet of Things.”

But let’s forget fancy IoT clothes, intelligent toothbrushes and wearable bracelets for a second – what you really should be looking at is what is going on behind the scenes.

IoT is transforming the enterprise sector

While most of us have been spending our precious time debating whether the IoT devices are the future or completely useless, enterprise sector has been silently transforming in a fast pace.

Enterprise tends to have a bad reputation for being the last one to adapt, but in this area … it rocks! Business transformation through the Industrial internet of things, people and services is skyrocketing with various sectors already using IoT technologies to track customers, products, business premises, or supply chains. The devices range from robot-like units to tiny chips that hook into industrial or office machines allowing the user to fully control the device, or merely collect specific data from it.

In fact, according to Business Intelligence report, the enterprise will be the largest IoT device market accounting for around 40% of the total of 23.3 billion IoT devices connected by 2019 across all sectors.

The value is in the big data

Why would companies risk and invest in such a new technology? The answer is – as always – the big data. It is almost unbelievable how much detailed real time data IoT devices are enabled to sense and transmit online via cloud, allowing companies to make business decisions fast.

The IoT data is used to reduce working capital and provide added value, whether it is much faster delivery times, stricter quality control or excellent customer service. It helps them to anticipate problems, detect errors, have insights how people really use the product and deliver new value added services.

Money is where the IoT is

Another reason why businesses are keen to adapt is that they have the capital and reach to purchase IoT devices and services on a large scale, which allows them to see benefits from the IoT faster.

This leads to further adoption and investment, and spending on enterprise IoT products and services is estimated to reach $255 billion globally by 2019, up from $46.2 billion in 2014: 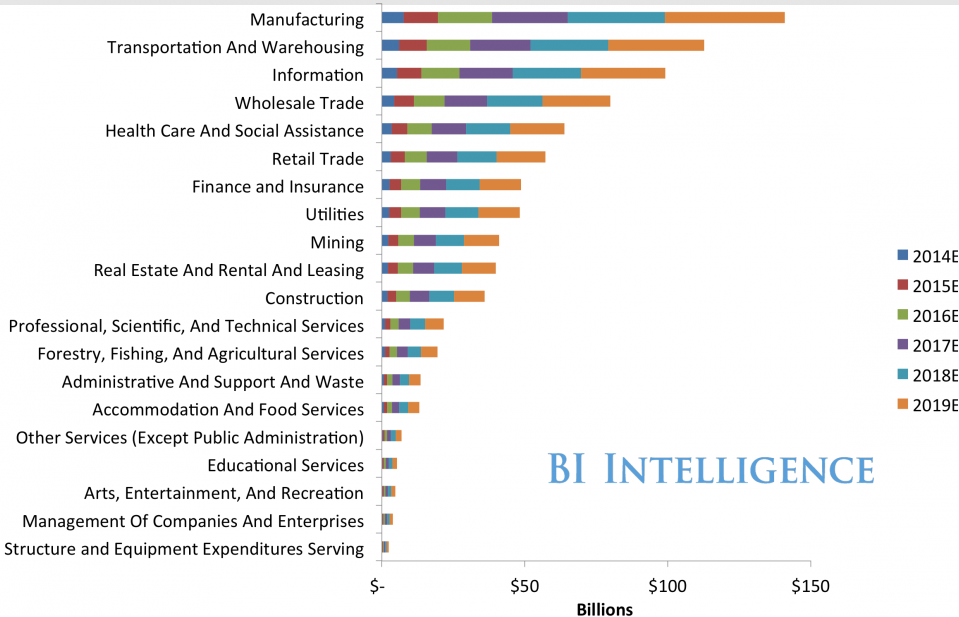 Plus the investment seems to pay off. In 2014, companies increased revenue 16% in business areas with an IoT initiative.

Shrinking lead times from concept to commercialisation and increased global competition, has forced enterprise sector to explore new technologies to differentiate themselves from the competition.

The concept itself is not new, of course. As Thomas Mayer, COO from Lotus F1 team, pointed out at Future Decoded, 3D models and connected information have existed for years – what has changed is the speed, cost and the way data is analysed globally in real time.

Thanks to constantly decreasing cost of these technologies, IoT is not anymore a privilege only big companies have. As it becomes less expensive to integrate technology into physical objects, there will be even higher adoption rate. By 2019 the enterprise IoT is predicted to be massive on its own, larger than the entire smartphone and tablet markets combined.

Thanks to enterprise and big data, Internet of Things won’t be the next big thing – it already is.