EMEA Tablet Market to Triple in 2011, but Apple, not Android, Dominates Europe 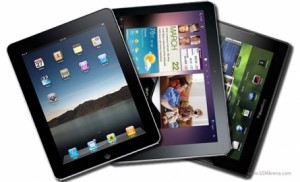 According to a research firm IDC, tablet market in Europe, the Middle East and Africa (EMEA) made up about 33% of last year’s global sales. The company also estimates that the EMEA media tablet market will more than triple in 2011 to reach 22 million units.

However, research firm Forrester predicts that tablet market in EMEA will account for 14.5 million units, or 30%, of worldwide consumer tablet sales in 2011. Not as positive prediction as 22 million units, yet the research firm indicates that more than 43 million Europeans say they are interested in buying a tablet in the future.

Despite recent Android launches in Europe, Apple still has 70% market share for tablet sell-through to consumers in Europe. It means that other tablet makers have product in retail channels, but it is not moving nearly as quickly as Apple’s iPad. Main reason is that non-iPad tablet competitors’ content ecosystem, applications and channel strategy are not as effective as Apple’s and their tablets’ prices are perceived too high.

Apple’s weakness outside the UK

However, Apple has a smaller number of Apple store outlets across Europe (52) compared to its more extensive network in the U.S.(240). What makes this even more interesting is that 30 of these Apple stores are located in the UK, leaving 22 for the rest of the Europe. It means that Apple could be vulnerable to competition outside the UK, since Apple’s brand and channel presence is not as strong in the continental Europe. For example, Mac ownership is lower in all EU-7 countries than it is in the U.S.

This weakness could give Samsung, HP, Acer and Research in Motion a chance to gain more market share in Europe yet if the prices remain the same, there is a danger that low-cost tablets from ODMs such as Huawei and ZTE will enter the market quickly and steal market share.

Yet even if consumers like low prices, being cheap is not enough to make them purchase the product. For tablet to be successful in Europe it has to be user-friendly, and have attractive content and useful applications both for free time as well as business purposes. In a very culturally diverse Europe it is very important to have local content providers, because English is simply not enough.

This means that t-commerce is another aspect tablet developers need to take in account while optimizing the user experience.

Anyone to challenge Apple?

Even if there are many competitors rushing into European market, Forrester argues that at the moment there is no serious iPad challenger on sight. This will not change and people will keep on buying iPads unless a competitor with competitive price, quality hardware and successful content ecosystem emerges.

Google might just do this. The search giant has agreed to pay $12.5bn in cash for Motorola Mobility to move  decisively into the hardware and into even more intense competition with Apple and Microsoft. Larry Page, Google’s CEO, said the reason for the move was to “supercharge the entire Android ecosystem for the benefit of consumers, partners and developers”.

What would be interesting to see is Nokia and Microsoft taking on the challenge to compete with the two. Nokia is known around Europe for its high quality and Microsoft office programs would result very attractive and familiar for European business users. If Microsoft does not invest in mobile and tablet market, the company will see its market share diminish. Nokia meanwhile has also strong reputation in emerging markets, which could help them to keep their market share.

In the end of the day, Nokia still has the strongest foothold in European mobile market even if all we hear about is Apple and Android. But as we Finns say: empty barrels make the most noise.