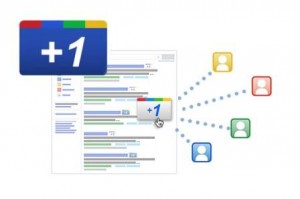 “Our goal with Google+ is to make sharing on the web like sharing in real life, as well as to improve the overall Google experience. Circles let you choose with precision who you are sharing with. Not surprisingly this has been very well received, because in real life, we share different things with different people.”

Google+, the new social networking service by Google, has already 10 million registrations two weeks after its launch even if it is invite only. Google +1 button itself was available since early June and its adoption rate is leaving Twitter behind. According to a study by BrightEdge, 4.5% of the analyzed sites have adopted the Google +1 plugin while Twitter Share was only adopted by 2.1% and Twitter Instant Follow by 1.3%.

What makes all this even more interesting is that the partnership between Google and Twitter allowing Google to integrate tweets into search results expired and it has not been renewed yet.

How to use Google+?

I discovered a very nice Google+ cheat sheet with small instructions on how to use the platform: 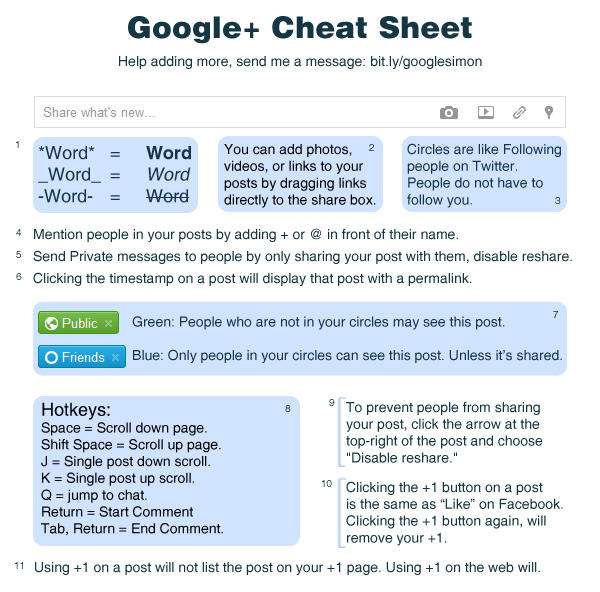 How does Google+ impact marketing and SEO?

Google owns 90% of the global search market and it is very important to appear high in the search results. Logically Google ranks higher the pages that feature +1 recommendations and +1 also appears both in the paid and natural listings. As with Facebook like button, +1 is a social proof the content is worth seeing and sharing, and more recommendations you have more likely users are going to click your page. Adding +1 button across your site will encourage content sharing and improve your ranking in Google. You are able to get the native button code here.

Please note that it only works in search for users who have their Google profile switched on at that moment, yet +1 buttons are visible in websites, logged in or not.

Google+ also has a mobile app for Android, iPhone OS, Nokia/Symbian, Blackberry and Windows Mobile. What surprises me is that +1 button does not appear in mobile search or websites accessed through mobile even if Google owns 98% of the global mobile search market and currently Google’s gross revenue from mobile advertising is over 1 billion dollars per year. Facebook like button and tweet button are visible.

A new set of menus “+1 metrics” within Webmaster tools.

The new Google Analytics Beta has a Social Engagement report showing the impact of different social media elements on your site. You are able to see which pages were viewed and which actions were taken. To set the report up, have a look at Google’s instructions. It shows how Google Analytics has setup interfaces for both Twitter and Facebook so for example Facebook Likes and Tweets can be recorded and viewed within Google Analytics.

It is still very early to say what impact Google+ has over Facebook and Twitter. The launch has been very successful, but it is to be seen how many active users stay after the novelty value has been worn off. Right now Facebook is starting to get out of fashion among young people since parents, aunties and grandparents are joining the platform, yet I am not sure if Google+ will be used by the young generation or if it will be used more professionally. This is why I would love to see some Google+ demographics.

Anyhow, Google+ is an active network, which is intuitive and easy to manage. It has a simple and functional design and it is integrated with all the Google tools. Facebook basic functions such as “wall” are intuitive, but to be honest to manage which contacts have access to which content you need to be an expert. Google has created a friend classification system which is much more intuitive than what Twitter and Facebook have and user has a full control who they are sharing their things with.

Yet in the end everything depends on where your friends are, because if there is no one to share content with there is no point using the platform. If the adoption rate remains high and users recommend Google+ to their friends Facebook might become the new MySpace.