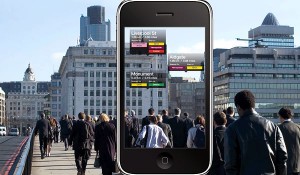 Main reason for the growth and high predictions is the exploding global use of Smartphones, which are able to run the augmented reality apps, and the big brands which are very keen to take advantage of the new shiny toy.

No wonder Google and Apple want the biggest piece of the cake. And are ready to fight for it.

Augmented reality – a new way to see the world

Long way short, augmented reality apps allow user to see digital text, animations, links or images in real time on top of the real life environment via mobile devices. For example, only by placing the mobile front of a painting in Rome, user can get information of the painter, history or dimensions. Or more fun example: user can play real life pac man, where the players look like computer pac man characters (through mobile of course). Basically, the possibilities are endless. See list of interesting AR apps here.

At present, most of the augmented reality elements focus on marketing and entertainment, but there has been some experiments with online shopping experience, ecommerce, tourism and search. Layar (http://layar.com) is currently the leader developing AR apps for both Android OS and iPhone OS, including advertising, reviews, ratings or other information users need in real time. Yelp is another rating and review service, mobile media company Ogmento creates AR mobile games and Wikitude shows the user in real world the information from Wikipedia and other sources.

Google and Apple are very interested in the possibilities augmented reality can bring, since both Android and iPhone have computer vision technologies that rely on Smartphone cameras. Other companies have developed AR apps for both OS, but it brings a small revenue compared to the profit and business opportunities a fully owned killer AR app could bring. In addition Google has already picked up a fight with Yelp, one of the providers.

Google started by creating Goggles, a mobile app for Android and iOS which can translate text, get more information out of contact info, artwork and books besides of recognizing landmarks, logos and wine labels. However unlike Augmented reality, Googles does not process and present things in real time. It takes a photo, sends it to Google’s servers, which recognize and translate it before sending the result back.

Apple meanwhile has acquired Polar Rose, a company which has created facial recognition software and other elements that enable the “automatic creation of events based on visual cues in images.” This brings enormous possibilities on social networking area.

Apple has the iPhone OS and technology, and Facebook its Facebook Places and large user base perfect for the newly acquired facial recognition. If these two companies join forces they can very well have a chance to compete with Google. Actually these two combined could possibly even be very, very dangerous for Google.

Let’s imagine Google decides to upgrade Google Places and create AR version. With its impressive data base and search engine & Google maps experience it could very well become a killer app. There are review and map AR apps, but they are mainly focused on cities and tourist attractions such as NY, Paris and London for example. Imagine an app you could use everywhere you go: like Google Maps with a real life view. Imagine what it would mean for local businesses and advertisers to be highlighted in real life environment.

Now if Apple and Facebook decided to join the forces, they could compete in AR “places” category with a social touch. Imagine an app where you can see in real life not only the ratings or info, but also which places have been recommended or visited by your friends. Seeing little pictures of friends who like the place or even friends who actually are currently there sounds very attractive. Imagine adding the Facebook “deals” function with the discount/offer that is available in the place.

Of course this Apple/Facebook partnership could lead even further if the two explore more the social networking capability on the iPhone. For example, user could see other person’s social networking info and feeds from Facebook just by looking at them though the phone. Big personal privacy issues yes, because no one wants a stranger in the street or bar to know his name and everything else about him. But then again – when exactly Facebook has cared about privacy issues?

It has been predicted that augmented reality will take between five to ten years to become mainstream, together with the Smartphones. Brands and consumers do not necessarily understand yet how the technology works, but AR creates interest and fascination. Android, Nokia, iPhone…there is something to explore and take advantage of.