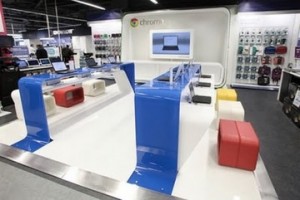 In 2011 Apple took over Google’s position as the most valuable brand in the world. Even if Google dominates PC as well as mobile search, despite recent Android launches Apple still dominates mobile as well as tablet market in the West. One of the Google’s weaknesses in mobile and tablet business has been the quite in-existing Android content ecosystem as well as competition between different manufacturers using Android OS.

However, things are getting more interesting. The search giant has recently agreed to pay $12.5bn in cash for Motorola Mobility to move decisively into the hardware and into even more intense competition with Apple and Microsoft. Larry Page, Google’s CEO, claimed that the reason for the move was to “supercharge the entire Android ecosystem for the benefit of consumers, partners and developers”.

Now last week Google launched its first Google branded retail mini-store, Chromezone, in London, UK. Surprisingly the company did not make a big buzz about the launch and the little “Chromezone” simply appeared inside the PC World store in Tottenham Court Road. The mini-store sells Google Chromebook computers and accessories and will be up and running for three months.

The mini-store however is only a start of Google retail plans: the company is planning to create more pilot shops around the world in the next few months and, if successful, Google is likely to create permanent retail stores to compete in different level with Apple and Microsoft.

“It is our first foray into physical retail. This is a new channel for us and it’s still very, very early days. It’s something Google is going to play with and see where it leads”, states Arvind Desikan, Google UK head of consumer marketing.

One of the reasons Google said lead to their decision to expand in retail was that company’s research showed 80% of laptop sales being done in physical shops. Until now Chromebook has only been available online.

From Chromebook to full range of products?

If the pilot works and Google’s retail mini-stores turn into permanent Google stores, it will be interesting to see whether Google will take advantage of the opportunity to showcase its full range of products.

Currently to browse or buy Android devices offline, the consumer needs to go through operators or computer/mobile stores. But for everyday, not-so-tech-savvy, consumer the word “Android” might not mean much, especially if you compare it with the word “iPhone”. But there is no one who does not know the brand “Google”.

This means that Google could leverage both the strong brand name as well as the great selection of products ranging from physical mobiles, tablets and laptops to Google search, Google maps, Google+, Youtube, and other company’s platforms and services. Not to forget different Google “stuff” for the Google fans. It would offer normal consumers as well as tech “geeks” a great in-store experience, increased brand awareness and engagement (and sales) for Google, and an additional showroom for different Android manufacturers.