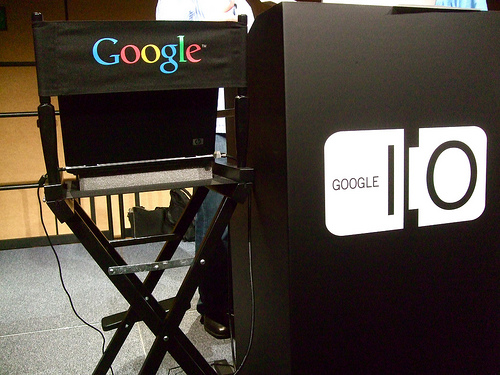 Equipped with a Red Bull and a bowl full of popcorns, I had a chance to watch the three-hour-long Google I/O keynote yesterday. The event I wait with excitement every year was full of quite interesting announcements – or should I say “improvements” – especially in Google’s key areas of business for consumers and developers.

The keynote started with interesting news about Google’s Android OS, with company stating there had been 900 million activations of Android devices. Great.

Now to the best part: Google announced a new tool for developers called ”Android studio”, which provides more options for Android devs to play with, making the process faster and more productive. It surely looks great and I have to say I’m excited about the beta tester, localization and tracking possibilities. Can’t wait to use it myself!

I’m not sure if this is “end of search as we know it” as it already exists on Android phones, but it is surely very interesting addition to a desktop search. The company announced in Google I/O 2013 that the conversation-like voice search is now moving from Android mobiles also to users’ computers through Chrome, giving people a new search experience where no typing is required.

Don’t be deceived – this is not like Apple’s Siri. It is much better. Why? The real power behind this search function is not in the voice recognition technology itself, but in Google’s data backend and what it knows about you. Apple might have a similar technology, but Google simply knows much more about you –  especially if are signed in to Google and Google+. This gives you a truly personal and relevant “conversation” experience (which can be sometimes scarily accurate…)

It will be interesting to see whether Google will add option “voice search” in their AdWords target options.

Google is also improving its photo services in Android and Chrome with a cool feature allowing it to automatically create a photo album from hundreds of images uploaded to your photo cloud storage. Google picks the best photos based on aesthetic and image quality, landmark locations, friends and family members recognition, and it even checks whether people are smiling or not! It also disqualifies duplicates, blurry and under/overexposed images.

Whether you like Google+ or not, its new look and feel is eye-catching. I personally think the way posts are presented is more clear, more attractive and reading and posting in the platform is much more user-friendly.  The new dynamic display does not only allow you to have up to three columns, but you can choose whether you want to show your content in 1,2 or 3 columns. One to watch, as Facebook is moving to a sales focused format in their platform alienating especially younger generation. Watch out Facebook – Google Plus is finally starting to look sexy!

Google also introduced a new feature called ‘Related Hashtag’, which allows Google to automatically add its own hashtags to your posts based on the text within your post. What comes to images, by using a new feature called “Image analysis” Google is able to analyze your image and decide whether there is any recognisable content in it. And then add an hashtag such as #Rome. Quite #cool.

If it is too much for your privacy conscious brand / mind, you can opt out for one post or all of them quite easily.

… robots fighting with light sabers. How could anyone possibly not like that? 🙂