Teenagers and brands in the Middle-East & North-Africa 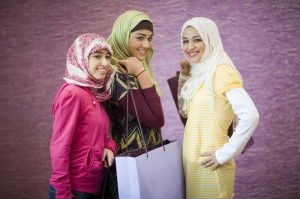 An interesting new study by AMRB and TRU shows that a large number of teenagers in the Middle-East and North-Africa prefer brands that help and allow them to express themselves and be distinct than others. The research firm surveyed 2000 12–19 years old teenagers in the United Arab Emirates, Egypt and Saudi Arabia to get an in-depth picture of their behavior.

In United Arab Emirates the average amount of money teenagers spend in a week is a high 65€, compared with the average sum of 26€ worldwide. They use 58€ a month in clothing to be able to stand out as individuals in “a largely conformist and homogenous society”. Teenagers in UAE also spend 20€ a month in consumer electronics, 16€ a month for mobile phones and related services, and 5€ for cosmetics. Saudi-Arabian teenagers spend also an above average amount of money a week, 38€ , yet in Egypt the amount lowered into 5€ a week.

In the whole, 70% of the participants possessed a mobile phone. 28% of the surveyed teenagers in the UAE owned a smartphone, a percentage which differs considerably of the other assessed markets. The most appreciated brands in the area are Pepsi and Adidas.

What comes to digital media in the three countries, Yahoo and Facebook were considered the most popular websites. Also, an increasing number of teenagers have started blogging to satisfy “a need for greater self expression”.

Have we been ignoring the teenagers in the Middle-East and North-Africa as a possible target group? The study opens interesting opportunities in this emerging market, however it has to be taken account that there are still some differences between “our” teenagers and the ones in the region. “MENA teens are much more closely tied to their families, culture and religion as compared to their global counterparts,” Gagan Bhalla, general manager of AMRB, says. “On the other hand they are very similar to global teens in terms of brand exposure, technological awareness and future aspirations”, she continues, “Marketers need to identify and resolve this conflict and find a balance where teens can have it all.” Considering the increasing amount of blogging, investigating the content teenagers write might be a great way to research how to approach these young consumers. They want to stick out of the crowd, but still respect their family and religion. My advice is to check what Adidas and Pepsi are up to, since they have reached the admiration of this target group.