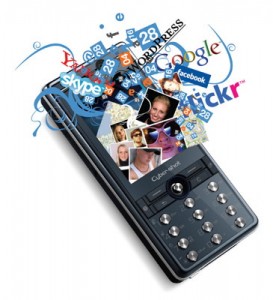 According to a study by GroupM Search, 48% of the online buyers use combination of normal and social search during the buying process and the percentage is increasing constantly. Consumers search every day brands their friends know and like, and 30% base their buying decision on their friends’ evaluations, 17% on Facebook and 9% on Twitter.

There has been a lot of discussion of social search threatening traditional search. As people spend more time in social networks, especially Facebook, it is to be seen whether users prefer results based on traffic and SEO or the results based on content voted (liked) by other users and friends.

But what if the battle between traditional and social search is not limited to computers, but takes place in mobile devices?

The quantity of Smartphones and users accessing Internet through mobile devices is increasing fast around the globe and ITU believes mobile devices will surpass computers as the most popular way to connect Internet within five years. According to Strategy Analytics almost 530 million users used the mobile Web at the end of 2009 and the company estimates the browsing to increase to over 1 billion by 2015.

Meanwhile, according to the Google Mobile, in Q1 2010 mobile search queries from high end phones on Google grew 62% over the previous quarter. Concerning the e-commerce, Google mobile searches on shopping-related keywords have grown 2500% in the past three years. Currently Google’s gross revenue from mobile advertising is over 1 billion dollars per year.

The search giant Google used to avoid social results in the past, but now the company is becoming more convinced of the importance of being more “people centric”. Even if Google Social Search was introduced few years ago, the social media related content has had a neglected role in the search results. Yet this is now changing: the recent update integrates information from Twitter, Flickr and Quora all over Google’s search engine.

What is quite funny to notice is that while Facebook is not included in Google Social Search, Facebook does not show web results by Google either, but by Google’s competitor Bing.

However, whatever the situation in computer search might be, currently in mobile search Google is definitely the king. According to Pingdom, Google owns 98% of the global mobile search market. 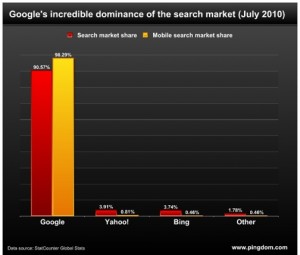 This is a very interesting detail since while Google is still the underdog in the battle between Android and iPhone, at least most of Steve Job’s iPhone users will be searching on Google. Which means big mobile ad revenues for Google whatever the OS might be. Not bad.

Google’s current position in mobile search seems unbeatable, however according to a recent study by Ofcom, almost 25% of the consumers in the U.S., Japan, France, and the UK already access social networks through mobile devices. There are also various apps that use geolocation to search, such as Facebook places, and apps that use geolocation and users’ reviews combined with augmented reality.

What is curious to notice is that while the whole world focuses on the competition between Google and Facebook while discussing social search, Bing has already gone a step further and integrated a social search feature to its Bing for iPhone App. The user can use their phone to search through their Facebook and Twitter accounts and see combined status updates from their friends. In case there is an instant answer for the search, the app shows it first before social results.

This is a very interesting idea, since this social feature allows the user to see information from the web together with the opinions from user’s social network. This increases the relevancy of the result and user experience, since the user can see with one quick look if the place is worth visiting or product worth buying without browsing further or visiting social network app or site. Also the information user finds is easy to share in Facebook, Twitter and email, which means users can share and ask their friends opinions in real time.

Could this be dangerous for Google? Yes. Google is not able to do this as long as it does not want anything to do with Facebook, which has more than 500 million users across the globe. Therefore this might be Bing’s opportunity to stand out, since users, who have their main friend base in Facebook, would not like the platform to be left out from the results.

Bringing social dimension to mobile search can be the next big thing if it is user friendly and well promoted. Whether it will affect Google’s current position as a principal mobile search tool, depends on its flexibility to accept that also results “liked” by Facebook users can be relevant. If not, other search engines or Facebook can take advantage of this default and challenge Google  also in mobile search.